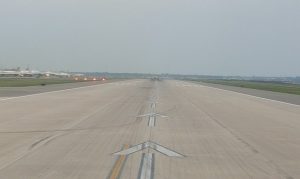 In 2001, the U.S. Congress established a research program to improve airfield concrete pavements in Section 905 of Public Law 106-81, the Wendell H. Ford Aviation Investment and Reform Act for the 21st Century, by providing $2 million annually for applied pavement research. The program was reauthorized and expanded in 2004 to include asphalt in Section 704 of Public Law 108-176, Vision 100 – Century of Aviation Reauthorization Act. Congress provided $4 million annually for pavement research during fiscal years 2004–2006. The program funding was split equally between asphalt and concrete airfield pavements. The research projects completed under the original airfield improvement program focused on improving quality of pavements, reducing costs, improving safety, and providing training.

The original Airfield Concrete Pavement Technology Program (ACPTP) produced 33 reports, 8 guides, 6 engineering tools (e.g., videos, presentations, spreadsheets, flow charts), 2 handbooks, and promoted close collaboration between the Federal Aviation Administration (FAA), U.S. Army Corps of Engineers, the concrete pavement industry, airport sponsors, contractors, manufacturers, and consultants. These resources are housed on the World Wide Web and are still used today by all stakeholders during planning, design, and construction, of airfield pavements. As a result of the program, many improvements have been made to state and federal agencies’ design guidance and construction specification guidance. However, the industry and FAA have defined additional applied research that is outside the scope of the abilities of the FAA Test Center. Unfortunately, several projects identified by the ACPTP Program Coordination Group (PCG) during the previous ACPTP were never completed due to lack of additional funding.

The FAA Reauthorization Act of 2018 provided authorization to revamp the Airport Pavement Technology Program (APTP). The mission of both the asphalt and concrete programs is to deliver applied research on airfield pavements that leads to high quality, durable, safe, and cost-effective pavements. The past program has been considered a huge success by both pavement industries, the FAA, and the U.S. Department of Defense, and the 2018 reauthorization and additional funding provided in the 2020 Appropriation Bill have allowed the restart of this important applied research program.

Addressing the research needs for
concrete pavements at airports