History of the CP Road Map

The CP Road Map (or Long-Term Plan for Concrete Pavement Research and Technology) was an innovative program developed and jointly implemented by the concrete pavement stakeholder community.

The CP Road Map aimed to prioritize and coordinate the nation’s concrete pavement research so that effective tools and practices could be implemented to reliably deliver sustainable concrete pavements and its story is outlined below as follows.

For most of the 20th century, the same materials—portland cement, aggregate, and water—were used in pavement concrete with only minor refinements. It was a fairly forgiving system that allowed some flexibility in material quality, construction practices, and other variables without sacrificing pavement performance.

For generations, the industry had enjoyed the luxury of keeping traffic off new concrete pavements for several days (even weeks) while the concrete developed its design strength. By the end of the 20th century, however, the following changes had turned the process of concrete paving on end:

The vision for the CP Road Map began in 2001 and was outlined in an agreement between the Innovative Pavement Research Foundation (IPRF) and the Federal Highway Administration (FHWA). Iowa State University’s Center for Portland Cement Concrete Pavement Technology (now the National Concrete Pavement Technology Center at Iowa State University’s Institute for Transportation) was chosen to lead the development and manage the implementation activities of the CP Road Map. This partnership culminated in 2005 in the publication of an initial Executive summary, Volume I: Background and summary, and Volume II: Research tracks. 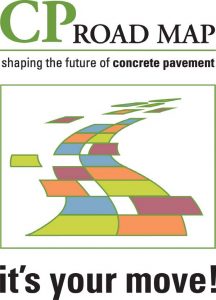 The CP Road Map was grounded from the beginning in acknowledgment that no single organization had the funds, expertise, or political capital to focus all research being done across the concrete pavement community. Thus, the CP Road Map brought to the same table representatives from national, state, and local agencies, academia, and industry for collaborative brainstorming sessions to assemble and synthesize research priorities. Ultimately, more than 400 stakeholders engaged in identifying critical needs and distilling them into twelve major research tracks (listed below).

The CP Road Map sought also to connect funding agencies with researchers by having a national set of research priorities that state highway administrations (SHAs) and other research funding entities could use to prioritize local funding and collaboration opportunities. Joint funding partnerships between FHWA, SHAs, and academia were established on many CP Road Map priorities that multiplied the cost effectiveness of research spending by allowing partners each to invest less, yet accomplish more.

Ultimately, over the course of 10 years, the CP Road Map investment enabled concrete-pavement-related sponsored research programs to leverage resources and help researchers funnel effort toward the stakeholder community’s top priorities. One of the very innovative early products of the CP Road Map was the Integrated Materials and Construction Practices for Concrete Pavement: A State-of-the-Practice Manual (now in its 2nd edition), which for the first time communicated in a user-friendly manner the growing complexity of mixture design, materials selection, and construction practices.  Additional CP Road Map accomplishments are below.

12 primary research tracks and several subtracks were identified by the CP Road Map Executive Committee. The committee then prioritized the 12 tracks (priority tracks marked * below), obtained executive-level buy-in to the CP Road Map, and cultivated collaborative sponsorship of research across the nation.

The 12 key research tracks of the CP Road Map, with their respective goals, are detailed below.

The goals of the CP Road Map’s “Materials and Mixes” track were to develop and deliver integrated tools and techniques for specifying, proportioning, and constructing mixtures that meet the combined needs of owners and contractors: constructible, long-lasting, sustainable, cost-efficient, and verifiable concrete pavements. The topic is important because today’s materials for concrete mixtures have changed rapidly as environmental, cost, and performance constraints have become more stringent.

The goals of the CP Road Map’s “Performance-Based Design Guide for New and Rehabilitated Pavements” track were to continue enhancing the next generation of mechanistic approaches to pavement design and improving their integration with materials, construction, and environmental inputs. A major element of the track was helping agencies and contractors successfully make the change from strictly empirical design approaches to mechanistic approaches.

The goal of the CP Road Map’s “Equipment Automation and Advancements” track was to enable concrete paving process improvements and equipment advancements that would expedite and automate PCC pavement rehabilitation and construction, resulting in high-quality concrete pavements, reduced waste, and safer working environments.

The goal of the CP Road Map’s “Innovative Joint Design, Materials, and Construction” track was to identify, develop, and test new and innovative joint concepts for concrete pavements that are more cost-effective, reliable, and durable than current alternatives.

The CP Road Map’s “Foundations and Drainage” track aimed to provide pavement engineers with tools to better design, construct, and evaluate both foundations and drainage systems for concrete pavements.

This CP Road Map track addressed business and economic issues in concrete paving. It had two main goals: (1) to address the management and financing of the Executive Committee functions, including innovative management systems, and (2) to address concrete pavement economics.

The concrete pavement “Sustainability” track was the last addition to the CP Road Map. The objective of this track was to identify and complete research and implementation that improves concrete pavement sustainability through the pavement’s life cycle (design, materials selection, construction, operation, maintenance, restoration, rehabilitation, and recycling).

The CP Tech Center continues to carry on the important legacy of the CP Road Map as follows:

For more information about the former CP Road Map, contact:

The “CP Road Map E-News” is now being published as the “NC² E-News.” Previous issues of both “E-News” generations are available from the “NC² E-News” (where one can also subscribe to future issues).