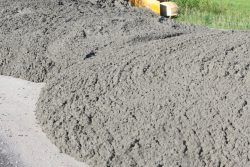 Aggregates make up most of the volume in concrete, but it is a mixture’s cementitious materials that bind its aggregates together.

Supplementary cementitious materials (SCMs) contribute to a concrete’s fresh and hardened properties through hydraulic reactions with water and/or pozzolanic reactions with calcium hydroxide (CH) during the formation of the concrete’s hydration products. SCMs may be added during cement manufacturing for a more consistent “blended cement” or at the batch plant.

Ordinary portland cement (OPC) is so named because its color was thought by its inventor to be similar to that of rock found near Portland, England. OPC is manufactured by heating controlled amounts of finely ground siliceous materials (shale), calcareous materials (limestone), and other materials based on desired cement properties to temperatures exceeding 2500°F (or 1370°C). This produces 1 in. (2 cm) hard spheres known as clinker that are then ground with gypsum into a gray or white powder.

OPC is by far the most common cement used in the design of modern concrete for construction and is specified in ASTM C1157/C1157M, ASTM C150/C150M, ASTM C595, AASHTO M 85, and AASHTO M 240. Chemistry and fineness determine a portland cement’s reactivity as well as the fresh and hardened properties of concrete made with it.

Utilized in Europe since the 1960s, portland-limestone cement (PLC) was first used in a US paving project in Colorado in 2007. The increasing adoption of PLC across the US has been driven primarily by sustainability concerns. With OPC, for every ton of cement produced, a nearly equivalent amount of CO₂ is released. PLC, a greener alternative blended cement specified as Type IL in AASHTO M 240 and ASTM C595 reduces this carbon footprint by about 10%.

PLC consists of cement clinker interground with up to 15% limestone. A 2018 CP Road Map brief “Portland-Limestone Cement after 10 Years in the Field” found both DOTs and contractors pleased with PLC performance in the field and over time, with PLC producing the same set times, the same early and late strengths, and no difference in required fly ash dosage or notable differences in chemical admixture dosages. 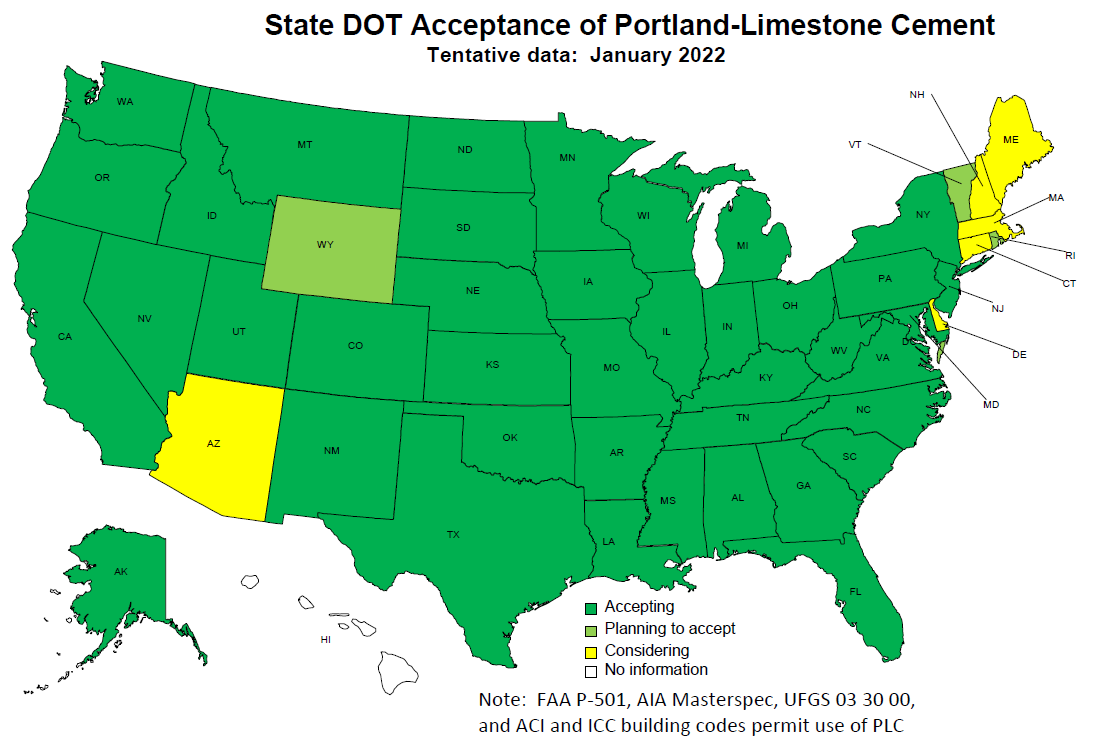 Supplementary cementitious materials (SCMs) are used as partial replacement for portland cement in 60% of modern US concrete mixtures. This is for two reasons, one environmental and one technical: 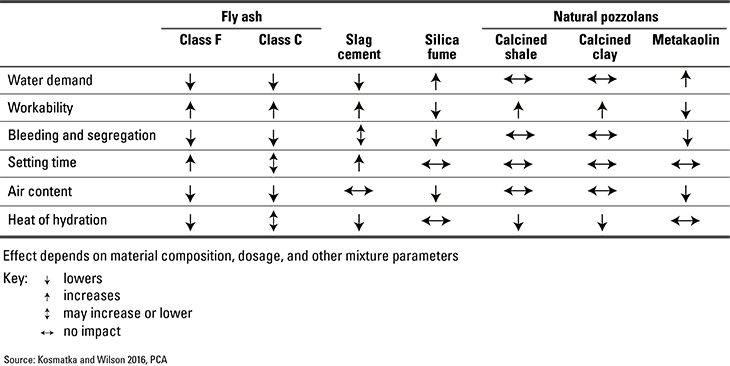 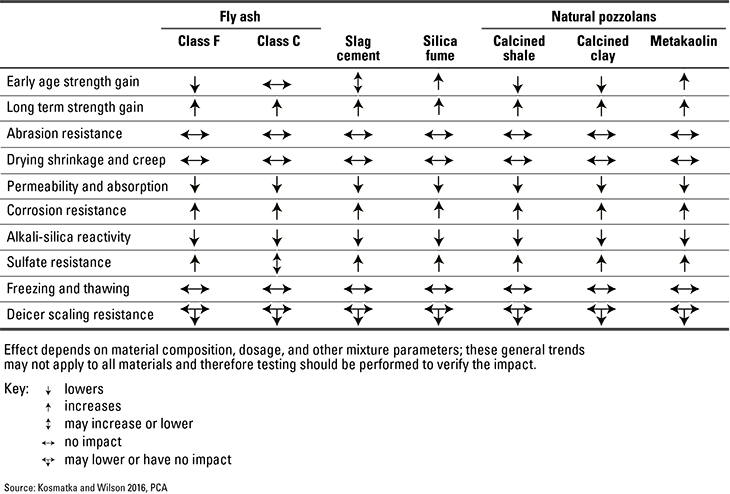 After processing, harvested fly ash from fly ash previously disposed of as waste has been shown to match the chemical and physical properties of freshly produced fly ash and therefore to have capacity to provide a consistent and reliable alternative fly ash supply for the foreseeable future.

Slag cement (previously called ground, granulated blast furnace slag) is a byproduct resulting from blast furnaces extracting iron from iron ore. Still molten, slag is directed into a granulator, where water quenches the molten material, forming glassy, sand-like particles of amorphous oxides of calcium, aluminum, magnesium, and iron. These particles are ground to a similar size as, or slightly finer than, portland cement.

Slag cement reacts slowly in the presence of water alone or more vigorously when activated in water in the presence of alkali hydroxides. This latter condition characterizes the pore solution of hydrating portland cement and, thus, the two cements react in a complementary manner.

Characteristic impacts of using slag cement in concrete are as follows:

A key reason slag cement is attractive as an SCM is because its typical dosage is higher than for fly ash—usually at least 35% of the total cementitious materials for North American paving concrete. In fact, even higher dosages of slag cement can be considered if required for providing resistance to ASR, for improving resistance to deicer chemicals, or for reducing the heat of hydration.

Silica fume, also referred to as microsilica or condensed silica fume, is a pozzolanic byproduct of the silicon and ferrosilicone industries. Specifically, silica fume is the condensed vapor from electric arc furnaces used to reduce high-purity quartz. Following collection via fabric filters, the material is processed to remove impurities.

Silica fume particles are mainly glassy spheres of silicon dioxide and are very small—some 100 times smaller than cement grains. Silica fume has a very low loose bulk density, so to improve handling, it is usually densified by tumbling in an air stream that causes the particles to agglomerate into larger grains held together by electrostatic forces. These agglomerations must be broken up during the batching and mixing of concrete mixtures and the silica fume uniformly distributed throughout the mixture.

The water requirement of silica fume may be high, requiring that superplasticizers be used in mixtures containing more than 5% silica fume by mass of cement. The resulting concrete normally exhibits significantly increased strength and reduced permeability but, due to inadequate bleeding, is often at higher risk of plastic shrinkage cracking. Because it can reduce workability and is expensive, silica fume is typically not used in pavements except for special applications such as those subjected to studded tires or in curbs and gutters.

Nanosilica is a nanoscale SCM that substantially increases pavement durability. By decreasing permeability, nanosilica increases the resistance of pavements to distress under even harsh deicing conditions and heavy loading, such as that often experienced by airfield pavements.

Natural pozzolans have been used for centuries, with many Roman, Greek, Indian, and Egyptian pozzolan concrete structures still standing, attesting to the durability of these materials. Primary deposits in the US are geographically limited but where they are available have emerged as alternatives to fly ash and slag cement for general purpose concrete.

Calcined shale may contain on the order of 5%–10% calcium, which results in its having some cementing or hydraulic properties.

Calcined clays are used in general purpose concrete construction in much the same way as other pozzolans. They can be used as a component of the total cementitious material, typically in the range of 15%–35%, and can enhance strength development and resistance to sulfate attack, control ASR, and reduce permeability.

Metakaolin is produced by low-temperature calcination of high-purity kaolin clay. The product is ground to an average particle size of about 0.04–0.08 mil; this is about 10 times finer than cement but still 10 times coarser than silica fume. Metakaolin is used in special applications where very low permeability or very high strength is required. In these applications, metakaolin is used as an addition to the total cementitious material, not as a component of the overall cementitious content.

Like portland cements, blended cements can be the only cementitious material in concrete, or they can be used in combination with other SCMs added at the concrete plant.

Generally, alternative cements set and gain strength faster than portland cement and for this reason have been used for decades as repair materials. However, because the chemistry and properties of alternative cements can vary widely not only from portland cement but also from one another, they cannot be substituted without understanding of their performance. Information about their properties is available from ACI Committee 242: Alternative Cements.

Improve training in your state

Since 2006, informal quarterly “Lunch & Learn” training has kept Iowa’s county and municipal engineers on top of best practices and new methods/tools in concrete pavements in now ten locations across Iowa every fall, winter, and spring. For help setting up similar training for your state, contact: