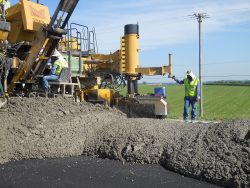 After nearly 10 years of positive project performance, it was found that nonwoven geotextile fabric separation layers work very well when used on existing pavements that have received the appropriate level of pre-overlay repairs. The fabric acts as a separation material to prevent cracks and other distresses in the underlying pavement from compromising the performance of new unbonded jointed concrete overlays placed over existing jointed and continuously reinforced concrete pavements. The fabric has also been shown to provide sufficient drainage to unbonded concrete overlay systems.

Following are some of the resources developed by the National CP Tech Center and its partners on geotextiles.

Report that documents the results of in situ deformation and composite modulus testing of unbonded concrete overlay test sections that were constructed in 2008–2009 on County Road V-18 in Poweshiek County, Iowa

Improve training in your state

Since 2006, informal quarterly “Lunch & Learn” training has kept Iowa’s county and municipal engineers on top of best practices and new methods/tools in concrete pavements in now ten locations across Iowa every fall, winter, and spring. For help setting up similar training for your state, contact: